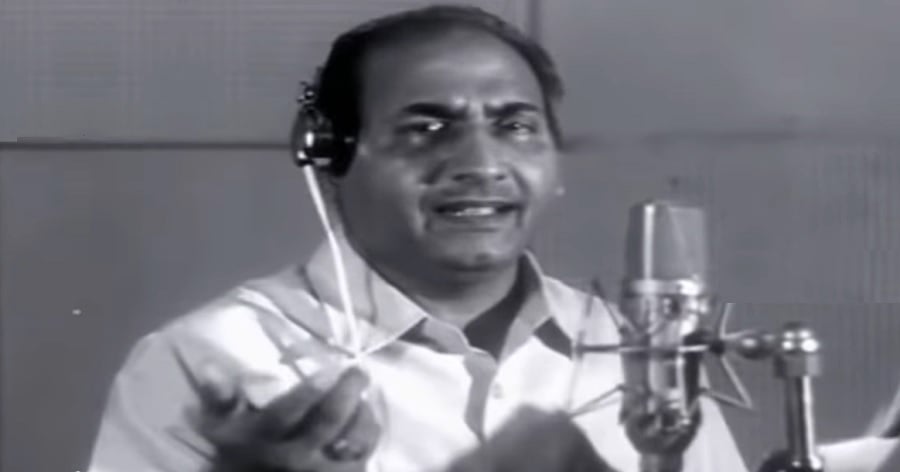 Who is Mohammed Rafi?

One of the golden voices of Hindi filmdom, Mohammed Rafi was definitely one of the greatest contemporary singers to have taken birth in India. He was blessed with such versatility that he could sing romantic numbers, sad songs, funny songs and ghazals, all with the same heartwarming soulfulness. Voted as “Indian Cinema’s Greatest Voice”, it is no surprise that even today he remains one of India’s most listened to singers—decades after his untimely death! Over a long and productive singing career that spanned over three decades, the singer recorded thousands of songs, several of which still remain etched in the memories of Indian film lovers. He had a strong command over the Hindi language and had the ability to modulate his voice and tone to suit the personalities of the actors he was singing for. Over his career, he sang for many of Bollywood’s superstars like Dev Anand, Shammi Kapoor, Dilip Kumar, and Sunil Dutt. Along with his solos, he was also very famous for singing duets with the leading female singers of his time like Lata Mangeshkar and Asha Bhosle. Though most of his songs were in Hindi, his repertoire also includes songs in Indian regional languages like Punjabi, Bengali, Marathi, and Telugu.

He was born as the fifth of six sons of Hajji Ali Mohammed and his wife in a village near Amritsar, Punjab. Rafi loved singing from a young age and used to imitate the chants of fakirs near his house.

The family moved to Lahore during the 1920s. It was in Lahore that Rafi’s elder brother’s friend, Abdul Hameed recognized the young boy’s talent and encouraged him to sing.

In 1941, Rafi made his debut in Lahore as a playback singer with the duet, ‘Soniye Nee, Heeriye Nee’ with Zeenat Begum in the Punjabi film “Gul Baloch’. However, the film was released only in 1944.

He then moved to Bombay to try for a singing career in the Hindi film industry. He made his Hindi film debut with the movie, ‘Gaon Ki Gori’ in 1945. ‘Aji Dil Ho Kaaboo Mein’ from this movie is considered his first Hindi song.

During this time he also appeared on the screen in two movies. He appeared on the song ‘Tera Jalwa Jis Ne Dekha’ in the movie ‘Laila Majnu’ in 1945. He also made an appearance in ‘Shahjahan’ in 1946, a movie for which he sang a number of songs.

His popularity began to soar during the late 1940s. He sang the song ‘Tera Khilona Toota Balak’ from the movie ‘Anmol Ghadi in 1946 and ‘Yahan Badla Wafa Ka’ in the 1947 film, ‘Jugnu’.

He decided to stay in India after the partition and made Mumbai his home. It was a very good decision as his Hindi film career was going great and would help him touch newer heights.

During the 1950s and 1960s, Rafi enjoyed great fame and glory as he became the undisputed voice of the super stars Dev Anand and Guru Dutt. It was the songs for movies like ‘Pyaasa’ (1957) and ‘Guide’ (1965) that made Rafi a celebrity.

He formed a very successful partnership with Shankar Jaikishan which produced many melodious and super hit songs. Some of the partnership’s most successful songs are ‘Teri Pyari Pyari Surat Ko’, ‘Baharon Phool Bharsao’ and ‘Dil Ke Jharokhe Mein’.

Rafi’s talents and his versatility to adjust his voice to suit any actor he sang for made him an extremely popular playback singer. However, during the 1970s he faced stiff competition from the new singer on the block, Kishore Kumar. But professional rivalry apart, the two singers also produced many duets.

He also formed successful collaborations with the leading female singers of his times, the sisters Lata Mangeshkar and Asha Bhosle with whom he sang a number of super hit duets that are popular even today.

Hailed as the ‘Best Singer of the Millennium’, Mohammed Rafi was undoubtedly one of the best known playback singers to have graced Indian cinema. A multiple award winner, he recorded thousands of songs over his career which was cut short by his untimely death.

The Government of India honored him with the Padma Shri, the fourth highest civilian award in the Republic of India in 1967 for his contributions to the world of Indian cinema.

He won the National Film Award for the song ‘Kya Hua Tera Wada’ in the year 1977.

He married his cousin, Bashira in his ancestral village. But she left India and went to Pakistan at the time of partition and thus the marriage ended.

His second marriage was to Bilquis. He had a total of seven children and was very much a family man. He was a very humble person with simple interests. He was dedicated to music and practiced regularly.

He died suddenly of a heart attack on 31 July, 1980 at the age of 55. His death came as a shock to the nation as he was a teetotaler with clean habits.