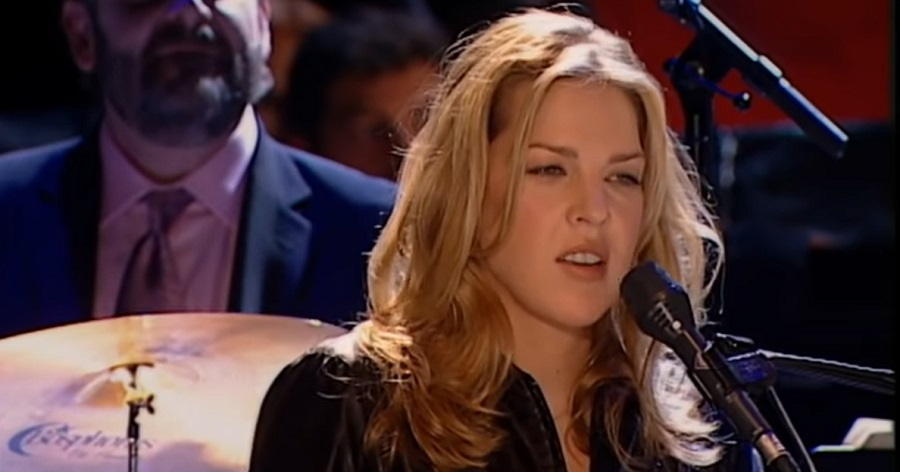 Who is Diana Krall?

Diana Jean Krall is a Canadian jazz pianist and singer whose albums have sold over 15 million copies worldwide. She was ranked at the #2 spot on Billboard’s list of jazz artists of the 2000-09 decade. Krall grew up in a musical household and started learning piano at the age of four. By the time she turned 15, she was playing jazz at a local restaurant. After completing her education at Berklee College of Music, she moved to Los Angeles to start her career as a jazz musician. She later returned to Canada and released her debut album, ‘Stepping Out’, in 1993. In the ensuing years, she put out 13 more albums and won three Grammy awards and eight Juno awards. Her repertoire includes nine gold, three platinum, and seven multi-platinum albums. The talented artiste has also performed alongside the likes of Eliane Elias, Shirley Horn, and Nat King Cole. Particularly known for her contralto vocals, she is the only singer in the history of Jazz to have eight albums that have debuted at the top of the Billboard Jazz Albums. In 2003, she received an honorary PhD. (Fine Arts) from the University of Victoria.

Born on November 16, 1964, in Nanaimo, British Columbia, Canada, Diana Krall is one of the two daughters of Adella A. (née Wende) and Stephen James "Jim" Krall. Her father was an accountant while her mother was an elementary school teacher. Both of her parents were amateur musicians; her father played piano at home while her mother was part of the local church choir. Her sister, Michelle, previously served in the Royal Canadian Mounted Police (RCMP).

Her musical training began at the age of four when she started playing the piano. At 15, she was performing as a jazz musician at a local restaurant. She later attended Berklee College of Music in Boston on a scholarship and then moved to Los Angeles where she garnered a loyal fan following in the local jazz scene. She came back to Canada for the release of her debut album in 1993.

Diana Krall collaborated with John Clayton and Jeff Hamilton to release her debut album, ‘Stepping Out’. Her work drew the attention of producer Tommy LiPuma, with whom she made her second album ‘Only Trust Your Heart’ (1995). She received her first Grammy nomination for the third album, ‘All for You: A Dedication to the Nat King Cole Trio’ (1996). It also appeared on the Billboard jazz charts for 70 straight weeks and was her first RIAA-certified Gold album.

Her fourth studio album ‘Love Scenes’ (1997) was certified 2x Platinum by MC and Platinum by RIAA. Her collaboration with Russell Malone (guitar) and Christian McBride (bass) received much praise from the critics.

In 1999, collaborating with Johnny Mandel, who provided the orchestral arrangements, Krall put out her fifth album ‘When I Look in Your Eyes’ through Verve Records. Certified Platinum in both Canada and the US, the album also garnered her two Grammys.

In August 2000, she began touring with American singer Tony Bennet. They got together once more in the late 2000s for a song for the UK/Canadian TV series ‘Spectacle: Elvis Costello with…’

In September 2001, she set out on her first world tour. While she was in Paris, her performance at Paris Olympia was recorded and became her first live record after its release under the name ‘Diana Krall – Live in Paris’.

Krall sang a track titled ‘I'll Make It Up As I Go’ for the Robert De Niro and Marlon Brando starrer ‘The Score’ (2001). Composed by David Foster, it accompanied the end credits of the film.

In 2004, she got the chance to work with Ray Charles on the song ‘You Don’t Know Me’ for his album ‘Genius Loves Company’. Her next album, ‘Christmas Songs’ (2005) featured Clayton-Hamilton Jazz Orchestra. A year later, her ninth album ‘From This Moment On’ was released.

In May 2007, she became the brand ambassador for Lexus and also performed the song ‘Dream a Little Dream of Me’ with Hank Jones on piano. Her new album, ‘Quiet Nights,’ was released in March 2009.

Diana Krall released her sixth album, ‘The Look of Love’, on September 18, 2001, through Verve Records. It topped the Canadian Album Chart and reached #9 on the US Billboard 200. It was also certified 7x Platinum by MC; Platinum by ARIA, RIAA, RMNZ and SNEP; and Gold by BPI, IFPI AUT and IFPI SWI.

She worked with her husband Elvis Costello on her seventh studio album, ‘The Girl in the Other Room’. Released on April 27, 2004, the album garnered huge success in the United Kingdom and Australia.

Diana Krall was honored with the Order of British Columbia in 2000.

She was inducted into Canada’s Walk of Fame in 2004. A year later, she became an Officer of the Order of Canada.

Diana Krall married British musician Elvis Costello on December 6, 2003, at Elton John's estate outside London. This is her first and Costello’s third marriage. They have twin boys, Dexter Henry Lorcan and Frank Harlan James, who were born December 6, 2006, in New York City.

Krall lost her mother in 2002 to multiple myeloma. Only months before that, her mentors, Ray Brown and Rosemary Clooney, had passed away.

In 2008, the city of Nanaimo changed the name of Nanaimo Harbourfront Plaza to Diana Krall Plaza.