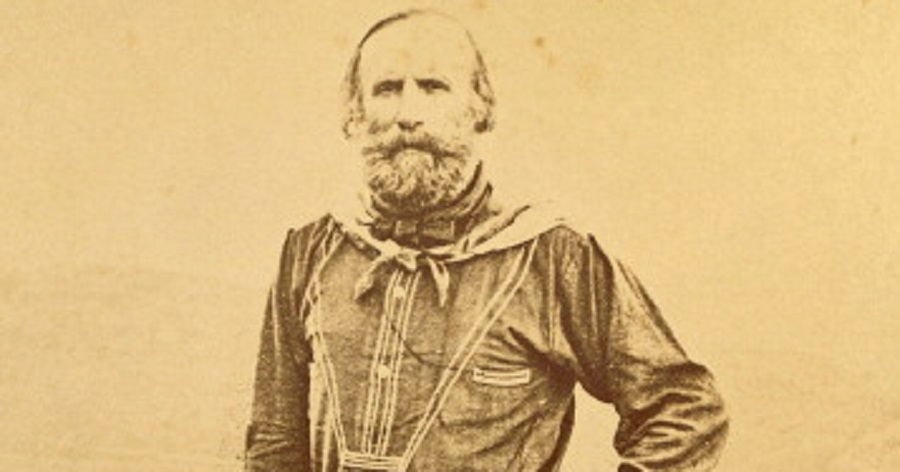 Who is Giuseppe Garibaldi?

Giuseppe Garibaldi was a patriot, military commander and a popular hero of the nineteenth century Italy. He has been hailed as one of the ‘Fathers of the Fatherland’ for his contribution to the Italian Risorgimento, which unified the fractured nation under one rule. His conquest of Sicily and Naples, which had hitherto been held by France, hastened the unification process and made him a national hero. In the beginning, he wanted to set up a free republican government in the unified Italy. Later he gave up this dream and fought only to unify Italy. His struggle was mainly aimed at the Austrian Empire and the House of Habsburg, who held large tracts of land in the north and central part of Italy respectively. He also waged several wars to abolish papacy. To defeat their much larger army, Garibaldi used guerilla warfare techniques, which he had learnt while fighting the imperialistic forces in Brazil and Uruguay. Later on in his life he advocated universal franchise and led a pacifist life in his farm in the island of Caprera.

Giuseppe Garibaldi was born on July 4, 1807 in a family of coastal traders in Nice in present day France. His father Domenico Garibaldi was a pilot in a trading ship. His mother Maria Rosa Nicoletta Raimondo was a pious woman, who wanted Giuseppe Garibaldi to join priesthood. However, Garibaldi followed his father’s footstep and went to the sea at the age of fifteen.

In 1832, he received certification as a merchant marine captain. In 1833, he sailed to Russian port of Taganrog. There he met Giovanni Battista Cuneo, a member of the La Giovine Italia movement of Giuseppe Mazzini. He joined the group and took oath to unify Italy and free his homeland from foreign dominance.

Garibaldi met Mazzini in 1834. In 1835, he took part in a mutiny that aimed to establish a republic in Piedmont. However, it failed and Garibaldi was condemned to death by a Genoese court in absentia. He then fled to Brazil.

Garibaldi lived in South America from 1836 to 1848. At this time, the continent was going through political turmoil. In Brazil, Garibaldi volunteered as a naval captain for Republic of Rio Grande do Sul, which was then trying to break away from Brazil. However, the endeavor did not succeed.

Garibaldi had by that time met his future wife Ana Ribeiro da Silvaor or Anita. In 1841, the couple moved to Uruguay and tried to settle down to a civilian life. However, it did not suit him and so in 1842, he took command of Uruguayan fleet and raised an Italian Legion to fight against the Argentinean dictator Juan Manuel de Rosas.

From 1842 to 1848, Garibaldi’s troop defended Montevideo; managed to occupy Colonia del Sacramento and Isla Martín García; won the Battle of Cerro and the Battle of San Antonio del Santo (1846). Tales about his heroic deeds reached Europe and engaged the attention of many renowned men.

His struggle in South America taught him the techniques in guerilla warfare. They came handy while fighting the French and Austrian troops, who were not trained in this type of combat. He decided to go back to Italy with the election of Pope Pius IX, known to be a liberal.

In 1848, Garibaldi went back to Italy with sixty members of Italian Legions. Earlier he had offered his service to Pope Pius IX, but had been refused. Now he offered to fight for Charles Albert, the King of Piedmont-Sardinia; but was rebuffed for his 1832 conviction.

Garibaldi then went to Lombardy with his men and offered assistance to the provincial government of Milan, which had rebelled against the occupation by Austria. Although he was able to defeat the much larger Austrian army in Luino and Morazzone he had to retreat to Switzerland in the end of August.

Threatened by the liberals, Pope Pius IX fled Rome in November 1848. On March 23, 1849, the Austrian Army defeated Charles Albert, the King of Piedmont-Sardinia, at the Battle of Novara. Hearing the news, Garibaldi set out for Rome in support of the Roman Republic and on Mazzani’s instruction took command of the city.

Napoleon III also sent French forces to Rome. On April 30, 1849 Garibaldi defeated much larger French Amy at Velletri outside Rome. However, with the arrival of fresh reinforcement the siege of Rome began on June 1, 1849 and continued through the month. Garibaldi played an important role in the defense of the city during this period.

Very soon, the leaders realized that they could not hold the city much longer. Consequently, they decided to withdraw from Rome and continue their fight from the mountains. On July 2, 1849 Garibaldi left the city with 4000 men and reached San Marino, which was neutral to the ongoing conflict.

However, Garibaldi and his men did not get asylum anywhere in Europe. Finally, he reached Tangier in Morocco. His wife and comrade Anita died on the way. Most of his men also deserted him. Yet, because of his tenacity and courage he began to be known as ‘The Hero of Two World’ from now on.

On realizing that his political goal was at that point unreachable, Garibaldi decided to go back to sea and earn his living, as a temporary measure. In 1851, he went To New York to procure a ship. However, he did not have enough money for the purchase and so he tried his hands in other trades; but did not succeed.

On April 1851, he left New York with a friend and reached Lima, the capital of Peru, in the end of the year. The residences of the city welcomed him warmly. Here he gained employment as a commander of a trading ship and travelled to different parts of the world.

Later, he bought a ship with collaboration of another Italian merchant and set sail for England in November 1853 and arrived at Newcastle on March 10, 1854. At the end of April, he set sail for Genoa, Italy, arriving there on May 10, 1854.

In Italy, Garibaldi bought land in the island of Caprera and stated farming. However, he went back to military life as the Second War of Italian Independence broke out in 1859.

By now, Garibaldi was disillusioned with Mazzani’s republican idea and began to believe that unification could be achieved only under the King of Piedmont. A chance meeting in 1858 with Camillo di Cavour, the Prime minister of King of Piedmont, had convinced him about that.

On the advice of Cavour, Garibaldi formed a volunteer unit called ‘Cacciatori delle Alpi’ and was designated as Major General in the Piedmont’s army. The unit won a decisive victory over Austria and captured places like Verse and Como. By the end of the war, Lombardy was also acquired by Piedmont and peace returned to north Italy.

Garibaldi next turned his attention to Central Italy. The uprisings in Messina and Palermo provided the opportunity he was waiting for. He gathered a thousand volunteers and landed at Marsala on the western most point of Sicily with two shiploads of men on May 11, 1860.

On May 15, 1860 Garibaldi’s army crushed much larger French army at Calatafimi. He then proclaimed himself the Dictator in the name of Victor Emmanuel, the King of Italy. By end of the month Palermo, the capital city of Sicily was under his occupation.

He then moved towards Messina in the east and won a ferocious battle at Milazzo. Whole of Sicily was under his rule now. Swiftly, he crossed the Straits of Messina to enter Naples. He then entered its capital city on September 7, 1860 amid great celebration.

French resistance was ultimately crushed at the Battle of Volturno on September 30, 1860 with the help of Piedmont’s army. Although Garibaldi next wanted to March to Rome he was stopped by the king. The city remained under papal control and was protected by the French. The king did not want another war.

Garibaldi next handed over the territories he had captured to Piedmont and retired to Caprera, which he considered his home. However, he was still disturbed because the Rome was under papal control and in June 1862, he raised an army of volunteers and made another attempt on Rome.

Contrary to his expectation, the government of Victor Emmanuel intervened and Garibaldi was wounded and captured. However, he was held honorably and was allowed to go only after his wounds had been treated and healed.

In 1864, he visited England, where he received a warm welcome. When Austria-Prussian War broke out in 1866 Garibaldi raised an army of 40,000 volunteers and defeated the Austrians in Bezzecca. As a result of this war Venetia was ceded to Italy.

In 1867, he marched to Rome once again. At the Battle of Mantana, he was again shot and wounded. This time too, the Italian government imprisoned him, but released him soon after.

Garibaldi kept on advocating abolition of papacy and establishment of republic. In 1870-71, he went as far as to assist the French Republic against Prussia and won many battles. He was later elected a member of French National Assembly.

Back home Garibaldi was elected to the Italian Parliament. In 1879, he founded ‘League of Democracy’, which advocated universal suffrage, emancipation of women and creation of a standing army. He also supported land reclamation projects in marshy areas.

Giuseppe Garibaldi got married thrice. His met his first wife Ana Ribeiro da Silvaor, popularly known as Anita, in 1834 in Brazil. They got married in 1842 and had four children. She died during their epic march after the siege of Rome in 1849. She was at that time carrying their fifth child.

Garibaldi next married an 18-year-old Lombard woman, Giuseppina Raimondi on January 24, 1860. However, soon after the ceremony he learnt that she was pregnant with somebody else’s child and left her.

He next married his longtime companion Francesca Armosino in 1880 and had four children with her. Three of these children were born before their marriage.

As he grew old, he became crippled with arthritis and finally died on June 2, 1882. He was almost 75 then and was buried in his farm at Caprera.

He also wrote three novels; Clelia or Il governo dei preti (1867), Cantoni il volontario (1870) and I Mille (1873). In addition he had left an autobiography, which was later translated in English.

Italian Navy has three ships named after him. Besides, his statues have been erected in many Italian towns. More importantly, Garibaldi served as an inspiration to many well known revolutionists and is revered by many even today.